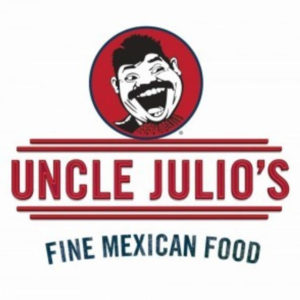 Dallas, Texas would serve as the flagship home of the Mexican restaurant chain better known as Uncle Julio’s, which made its debut in the 1980s. Seemingly experiencing few if any of the growing pains restaurants often endure as they develop a loyal customer base and achieve success, Uncle Julio’s achieved a level of popularity quite rapidly after opening for business. With its much-acclaimed margarita/sangria drink dubbed the “The Swirl” becoming the talk of the town, the restaurant became well-known throughout Dallas, further bolstering its success. Since its Dallas debut, Uncle Julio’s now boasts over twenty restaurants in several different states such as Florida, Georgia, Illinois, and plenty more.

You’re probably not going to find what most people would deem the typical “Tex-Mex” cuisine in Uncle Julio’s. Emphasis is placed heavily on sticking to fresh, domestically grown ingredients when it comes to the Uncle Julio’s dishes, all of which are prepared fresh each day. The fantastic taste is synthesized with a fierce commitment towards achieving a welcoming atmosphere and providing an optimum level of service to all who choose to partake in the Uncle Julio’s experience.